An Evening With Agur Schiff 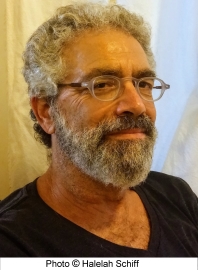 Agur Schiff was born in Tel Aviv in 1955 and graduated from St. Martin's School of Art in London, where he specialized in animation. He won critical acclaim as a filmmaker before turning to writing: he received the Silver Dragon Award at the Cracow Film Festival, and a prize at the Haifa Film Festival (1997) for his film Gentila.

His award-winning debut collection of short stories, Dying Animals and Bad Weather (1995), was followed by a second collection entitled Stories for Short Trips(1999) and three novels: Bad Habits (2004), What You Wished For (2007), and In the Sand (2010). His novel, The Latecomers was shortlisted for the Sapir Prize (2014), and Anonymity was published in 2017.

Schiff was awarded the Israel Prime Minister's Prize for literature in 2009.

Agur Schiff is a senior lecturer at the Bezalel Academy of Art & Design in Jerusalem where he teaches creative writing, screen writing and cinematic concepts. He lives in Tel Aviv with his wife and two children.

Sources: Words Without Borders | The Institute For the Translation of Hebrew Literature | Bezalel Academy of Art and Design