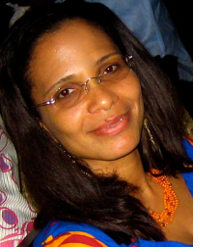 Writers Project of Ghana and the Goethe Institute, Accra are happy to present our guest writer for the month of October, award winning writer, Mamle Wolo.

Mamle Wolo, a writer of Ghanaian and German parentage, was born and raised in Ghana until the age of 14 when she moved to the United Kingdom. She completed her secondary schooling there, after which she studied at the University of Cambridge, where she obtained her BA and MA in Modern Languages and her MPhil in Latin-American Studies. She returned to Ghana in 1992 where she has since been resident and works as a freelance consultant in development issues. She took up fiction writing in the late 1990s and has since written numerous short stories under the name Mamle Kabu, all of which have been published in various anthologies and journals in Africa, the UK and the US. One of these is “The End of Skill”, which was nominated for the Caine Prize for African Writing in 2009.

She is a co-director of the Writers’ Project of Ghana and combines her work and writing with the raising of her two lovely children.

This reading offers a unique opportunity to interact with Mamle Wolo. There will be copies of her books available.