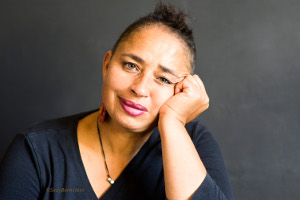 Phillippa Yaa de Villiers writes, performs and lectures in Creative Writing at Wits University, Johannesburg. Her poetry collections Taller than buildings (2006) and The everyday wife (2010, winner of the South African Literary Prize in 2011), and ice-cream headache in my bone (2017). She co-edited The Poems of Keorapetse Kgositsile for the University of Nebraska Press, (forthcoming) and her poems appear in New Daughters of Africa (2019) and various journals, including New Coin and Wasafiri. She edited a special edition of the prestigious Atlanta Review on SA Women Poets (2018) and co-edited No Serenity Here, an anthology of African poetry translated into Mandarin. (2010). Her short stories The day that Jesus dropped the ball (shortlisted for Pen/Studinski Prize 2009) and Keeping everything the same (winner: National Arts Festival/Het Beschrijf Writing beyond the fringe winner 2009). Her one-woman play Original Skin toured South Africa and abroad. Since 2007 she has read and performed at poetry festivals in Germany, Denmark, UK, Cuba, Sweden, Zimbabwe and Ghana, and her work is translated into French, Dutch, Flemish, Burmese, Mandarin, Italian, German and Spanish. She is a member of the editorial board of the African Poetry Book Fund and serves on the judging panel for the Sillerman Prize. She received a MA Creative Writing (with distinction) from Lancaster University. She comes from a background of theatre (Jacques Lecoq International School of Theatre 1989-1991) and worked at a television writer for ten years in the South African industry. She studied journalism at Rhodes University (BJournalism 1987) and has worked as a production assistant, waitress, actor, proof-reader, cleaning lady, children’s entertainer and hospital clown.

WPG is a not-for-profit organisation dedicated to helping Ghanaian writers explore and affirm their identity and culture.