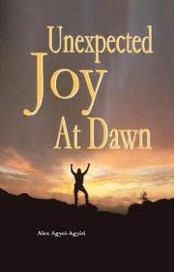 Writers Project of Ghana (WPG) is pleased to announce the commencement of the public reading series for the year 2013!

Born in Adamorobe in the Eastern Region, Alex Agyei-Agyiri is a graduate of the University of Ghana, and has been writing poetry since 1979. His poems Passover and This Death Call were amongst the best poems selected in the BBC Arts and Africa Poetry Award for 1982 and 1984 respectively. Two of his poetry collections won the Ghana Association of Writers prize for literature and the Valco Award for literature in 1982.

His novel, Unexpected Joy at Dawn, under the title Alien, won the Valco Award for Literature in 1988. Unexpected Joy at Dawn (Sub-Saharan Publishers, 2005) was commended in the 2005 Commonwealth Writers Prize (Africa Region). His novel, The Coffee Shop was published in 2007 by Letters and Marks Pre Publishing. Alex Agyei-Agyiri’s collection of poetry, Elements, was published in 2007, and his latest novel Rubble, in 2008 by Letters and Marks Pre Publishing. Alex also has a novel currently in print: One more Dance in December (Longing Publishers, New York).

Alex Agyei-Agyiri is a lawyer with the da Rocha chambers in Accra.

Do come for the reading and have an interaction with Alex Agyei-Agyiri. Copies of his books will be on sale.