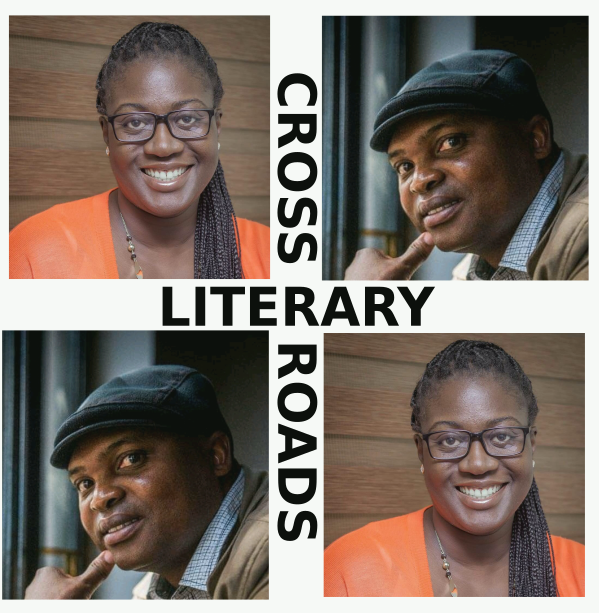 Writers Project of Ghana and Goethe-Institut Ghana bring you the third edition of Literary Crossroads in Accra this November. We proudly present from South Africa, novelist Niq Mhlongo and from Ghana, novelist Boakyewaa Glover at a reading and discussion session at 7 PM on Thursday, 28th November 2019, at the Goethe-Institut.

Niq Mhlongo is a Sowetan-born writer and a travel journalist who graduated from Wits University with a BA degree (African Literature and Political Studies) in 1996. He has written three novels, Dog Eat Dog (2004), After Tears (2007) and Way Back Home (2013), and a collection of short stories, Affluenza (2016), and Soweto, Under the Apricot Tree (2018). His novel Dog Eat Dog won the Spanish Literary Award Mar Der Letras Intenecionale in 2006. His collection of short stories, Soweto, Under The Apricot Tree recently won the Herman Charles Bosman Literary prize for English fiction (2019). He was shortlisted for the K. Sello Duiker Memorial Award (for young novelist) in 2007, The Sunday Times Fiction Award (2008), the MNET Literary Award (2008), and the Herman Charles Bosman Literary prize (2008). In 2009 he was nominated for the International Dublin Literary Award for his novel After Tears. His recent work grapples with issues such as crime, xenophobia, racism, homophobia, the new black elite, and land redistribution in South Africa.

Niq has also written for comic magazines, television and various other media platforms with numerous magazine articles under his belt. His work has been translated into several languages, including Burmese, French, Dutch, Flemish, German, Spanish, and Italian. Dog Eat Dog and After Tears were adapted into radio drama series by the BBC, Bush Radio, SAFM, and Swedish Radio. Niq has been a writing fellow in different institutions around the world, including the International Writing Program at the University of Iowa, USA. He has facilitated creative writing workshops in countries such as Zimbabwe, Botswana, Zambia, Switzerland, Tanzania, Ghana, Nigeria, and South Africa. He was one of Denaane judges in 2017 and curated The Time of the writer in 2019. He lives in Johannesburg. He is the City Editor of the online magazine called Johannesburg Review of Books (JRB) and freelances for few South African Inflight Magazines.

Boakyewaa Glover is a Ghanaian writer, entertainer and Organizational Psychologist. She attended Wesley Girls’ High School where she began writing, completing several books and plays during her time there.

Boakyewaa has three novels to her credit: Circles, Tendai, and The Justice, in addition to several articles, short stories, and poems. The novel Tendai represents her first foray into one of her favorite genres, science fiction. Tendai explores the repercussions of a biogenetic experiment gone wrong, when science is unwittingly pitted against Africa’s oldest and most powerful crafts, black magic. Circles is a coming-of-age novel set in the fast-changing times of the turn of the last century, and The Justice is a political thriller set in Ghana, following the deals and intrigues as a man struggles for the highest political office in the land.

Boakyewaa worked as a TV Presenter/Journalist for Metro TV’s hit show, Smash TV. Smash TV, was and still is after 20 years, one of Ghana’s most popular entertainment shows. Boakyewaa was on the show for three years, co-presenting with former Groove FM presenter Vladimir Nettey and Eddy Blay.

She was also the lead writer for GTV’s children show ‘S-Class’, writing 10 episodes before the show was canceled. She worked with TV3, one of Ghana’s largest television networks as a Newscaster/Broadcast Journalist, before leaving to pursue a graduate degree in Psychology at NYU.

She was a 2014 finalist for Africa’s Most Influential Women (organized by CEO Communications, South Africa) and a 2018 winner for Ghana’s 40 Under 40 Awards (Authorship & Creative Writing category).

Boakyewaa Glover worked in the corporate world for 15 years in the USA and Ghana before resignig in May 2018 to focus on her writing full-time and grow her company, Minds on Fire Group – a publishing and entertainment hub for budding artists. She currently runs Minds on Fire Group and curates an online lifestyle magazine.

Her latest project is Commitment with expected release in 2020.

Join us for this engaging reading and interaction with Niq Mhlongo and Boakyewaa Glover.