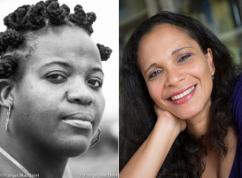 Writers Project of Ghana and Goethe-Institut Ghana bring to you the second edition of Literary Crossroads in Accra as our reading event for the month of August. We proudly present South African writer Zukiswa Wanner and Ghanaian writer Mamle Kabu at our usual monthly reading and discussion session.

Zukiswa Wanner is the author of the novels The Madams  (2006) which was shortlisted for the 2007 K. Sello Duiker Prize, Behind Every Successful Man (2008), and Men of the South (2010) which was shortlisted for the Herman Charles Bosman and Commonwealth Best Book (Africa region). In 2015, her novel London Cape Town Joburg (2014) won the K. Sello Duiker Prize. She is one of the authors in the anthology New Daughters of Africa (2019). Zukiswa is also the author of two works of nonfiction, Maid in SA: 30 Ways to Leave Your Madam (2013) and a literary travel memoir, Hardly Working (2018). She contributed essays with ALf Kualo for Mandela book, 8115: A Prisoner’s House (2010). She is also the author of three children’s books Jama Loves Bananas (2011), Refilwe (2014) and The Seven Continents: Africa (2019). Wanner is the creator, curator and director of the three-year arts collaboration performance Artistic Encounters at Goethe-Institut in Nairobi and has coordinated and edited the AfroYoungAdult project's Water Birds on the Lakeshore (expected date of publication October 2019).

Mamle Kabu is a writer of Ghanaian and German parentage and the author of the award winning young adult novel Kaya Girl which won the 2011 Burt Award. In 2009, she was nominated for the Caine Prize for African Writing for her story The End of Skill. Her short stories have been published in various anthologies and journals in Africa, the UK and the US which include, Mixed: An Anthology of Short Fiction on the Multiracial Experience (W.W. Norton, 2006) and African Women Writing Resistance: Contemporary Voices (University of Wisconsin Press, 2010).In 2014, she was a resident writer at the University of Iowa’s International Writing Program and then at the City of Asylum, Pittsburgh. In 2018 she won a scholarship to do a distance masters in creative writing at the University of Lancaster, UK. Mamle is a co-director of the Writers Project of Ghana (WPG).

Join us for the reading and interaction with Mamle Kabu and Zukiswa Wanner.